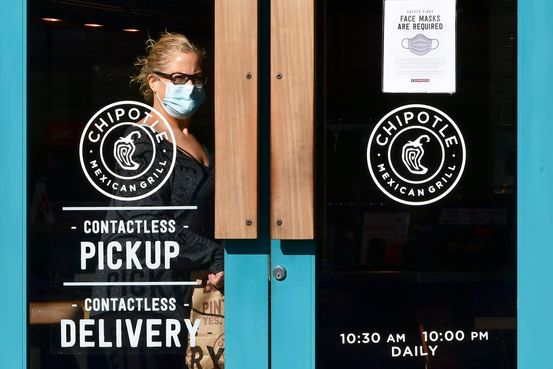 shares hit a record high Wednesday as the burrito chain expressed confidence about growth, saying customers are returning to its dining rooms to eat out despite higher menu prices.

Sales for the company’s quarter ended in June outpaced the same period before the pandemic, with more people eating out again, particularly at lunch, the company said.

“It was pretty amazing to see how quickly the consumer showed up,” Chipotle’s CEO

Investors are closely watching whether consumers are returning to restaurants amid inflationary pressures that have made going out to eat more costly and possible hesitancy related to the highly contagious Delta variant of Covid-19.

Chipotle raised its menu prices by around 4% earlier this year, but the chain said it hasn’t seen pushback from customers from the price increases. That price increase helped cover higher wages for workers, the company said.

The burrito chain was considered by some analysts to be a pandemic winner given its investments in delivery and online ordering before the virus’s surge. Online orders now account for nearly half of the company’s sales, however, the chain has also reopened all of its dining rooms.

Chipotle said it is planning to build at least 200 new restaurants this year and reiterated a long-term goal of 6,000 locations across North America.

Surveys show many consumers are ready to eat out again. Customers reporting they were dining out at a restaurant at least once a week increased by 20% in May compared with February, according to surveys by industry-research firm Revenue Management Solutions. Older consumers, who were more hesitant to go out earlier in the pandemic, contributed to the largest increase in those dining out again, the surveys showed.

said last month that its same-store sales in May were up above 2019 levels across its brands. The company was benefiting from strong demand, with fewer competitors after other restaurants closed last year, executives said.

Chipotle’s sales dropped earlier in the pandemic, but its ability to keep selling its food to-go helped buffer it from steeper losses experienced by sit-down chains.

The higher menu price helped pay for wages, which Chipotle raised to an average of $15 an hour last month as it fought to hire scarce workers. The company didn’t rule out further price increases, but executives want to see how inflation in the broader U.S. economy plays out in the next several months.

Write to Heather Haddon at heather.haddon@wsj.com

Appeared in the July 22, 2021, print edition as ‘Chipotle Says Diners Are Eating Out Again.’