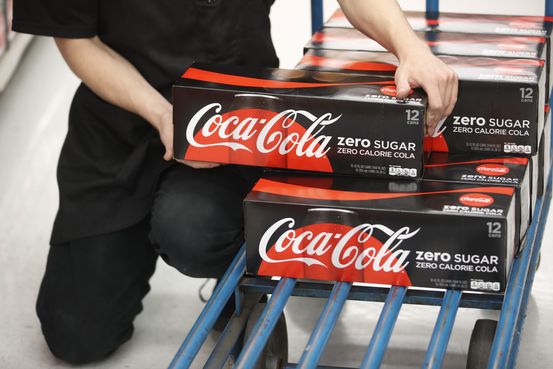 The beverage giant’s sales plummeted in 2020 when the Covid-19 pandemic closed dining and entertainment venues. The company’s revenue in the most recent quarter soared above levels from a year earlier and topped revenue in the same period in 2019.

said the results show that consumers are starting to return to pre-pandemic consumption patterns. “There was a lot of conversation a year ago on whether social behavior was going to be permanently impacted by the pandemic,” Mr. Murphy said. “What we’re seeing is that is actually not the case. People want to get out and about.”

Coke’s sales volume for the quarter ended July 2 grew ahead of 2019 levels in markets such as China and Brazil but trailed in India, which was battered by the pandemic this spring. Overall, volume was down slightly from 2019.

The company’s net revenue for the quarter was $10.1 billion, a sharp rise from a year ago and up slightly from $10 billion in the same period in 2019.

Coke now expects organic revenue growth of 12% to 14% in 2021, up from a prior view of growing at a high-single-digit rate. It projects per-share earnings will grow between 13% and 15% this year, up from a prior forecast growth rate of between high single digits and low double digits.

What did you find most interesting in Coca-Cola’s quarterly report? Join the conversation below.

Mr. Murphy said the company’s hedging strategy would allow it to manage rising costs for ingredients and transportation through the rest of the year.

Company executives noted that the more-contagious Delta variant of the coronavirus, which now accounts for 83% of cases in the U.S., could prompt new lockdowns around the world.

“We remain very clear-eyed about the potential spikes in some markets due to the Delta variant but overall we see a clearer path” for a return to normalcy, Mr. Murphy said.

added that while consumption in the U.S. has rebounded, the country isn’t yet past the pandemic.

“It’s not over and we can see that in the numbers,” he said on a call with analysts. “It’s certainly moved to a phase like other markets where there’s high levels of vaccination, where the most serious parts of the Covid are affecting mainly the unvaccinated as well as some of the vulnerable.”

Coke’s unit-case volume, or the number of 24 8-ounce servings of finished beverages sold, grew 18% in the quarter compared with the same period a year earlier. Its volume grew by 17% in North America; by 21% in Europe, the Middle East and Africa; by 12% in Latin America and by 16% in Asia.

—Coca-Cola’s biggest competitor—also raised its profit outlook for the year, citing an increase in consumer mobility this spring. Unlike Coke, PepsiCo is also in the snacks business. PepsiCo now expects a 6% organic revenue increase and an 11% increase in adjusted earnings in 2021, following a year in which sales declined because of the pandemic. The company’s net revenue for the quarter ended June 12 was $19.2 billion compared with $16.4 billion in the same period in 2019.

Coke last year mitigated revenue declines and improved operating-profit margins through layoffs and other cost-cutting measures such as narrowing its focus on core brands. It discontinued Tab, a diet soda popular in the 1970s, and Zico coconut water.

Earnings in a Changing Pandemic